Trying to think of a different place to go birding last week, it came to me that Coyote del Malpais Golf Course in Grants might be good. eBird confirmed that idea, with Phil Chaon’s report of 70 species there from September 7. Birding has been excellent the few other times I’ve been in the past, but somehow I rarely think of making the 1 1/2 hour drive to get there. Looking at the Burrowing Owl from this Spring I remembered Kim Score had planned an April 19th CNMAS Monthly Field Trip, and Ken Zaslow a Thursday Birder trip for April 23rd, both cancelled due to the Covid-19 pandemic.
On a Friday morning, there were a fair number of golfers on the course, some with their masks, but once away from the clubhouse it was easy to keep your distance from any other people. It’s quite a large area (the course itself is more than 4 miles long) with several large ponds and good natural habitat for birds.
Rebecca Gracey and I spent a couple hours there walking around the central part of the golf course and seeing an impressive number and variety of birds. As typical lately, there were ridiculous numbers of Wilson’s Warblers, but we’d also see Ruby-crowned Kinglet, a Townsend’s Warbler, Orange-crowned Warbler, and Black-throated Gray Warbler. 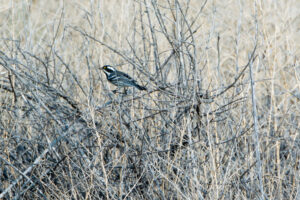 The ponds had plenty of American Avocet, White-faced Ibis, Ruddy Duck, Northern Shoveler, Mallard, and others. 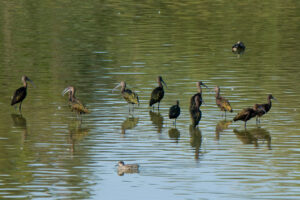 A Northern Harrier and a falcon (possibly Prairie?) flew by, and we’d see several sparrow species, including Chipping Sparrow, White-crowned Sparrow, and Lark Sparrow. A highlight of the day was spotting a bird that “looked different,” but we couldn’t quite figure out until getting some expert opinion – a non-breeding/immature Chestnut-collared Longspur. 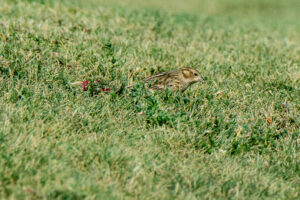 To get there, take I-40 to exit 89 and Rt.66 for 4.6 miles; right on Sakelares Blvd. for 0.8 miles, and right on George Hanosh Blvd for 1.0 mile.
This entry was posted in Uncategorized. Bookmark the permalink.

This site uses Akismet to reduce spam. Learn how your comment data is processed.