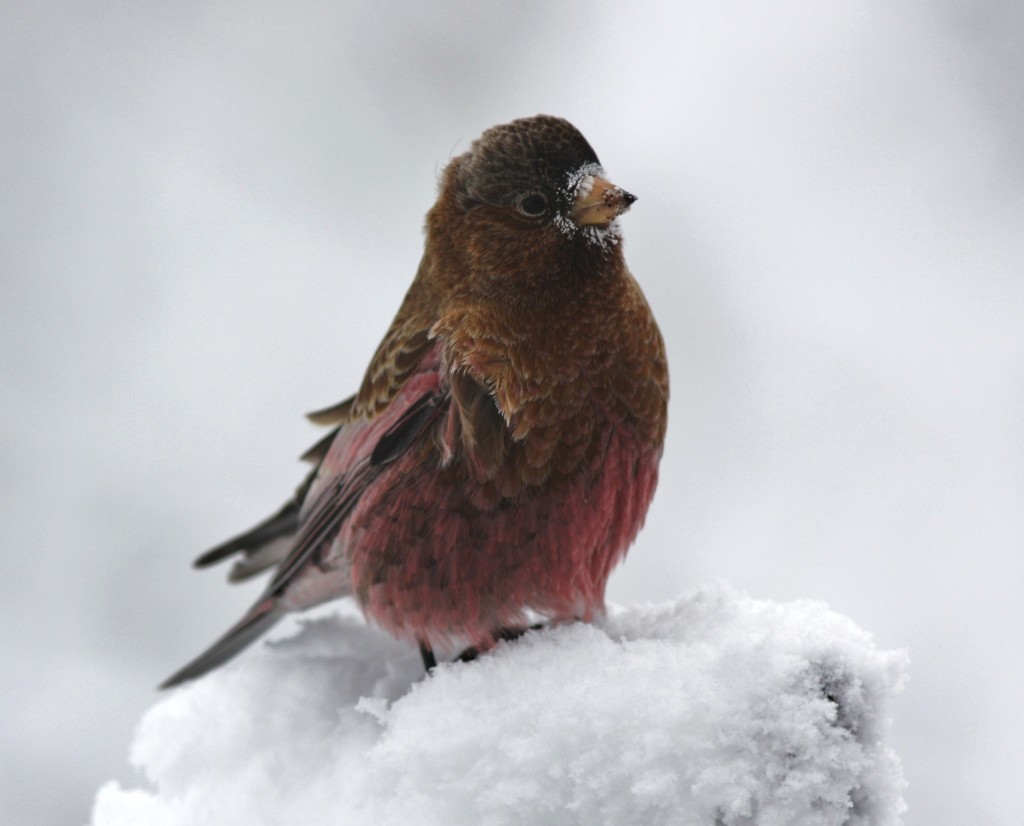 The Rosy-Finch Project is a multi-faceted ecology study of the three North American species of Rosy-Finches. Central New Mexico Audubon has adopted the project and helps to support this important conservation and education effort. The project itself is run by Rio Grande Bird Research Inc. (RGBR), a local non-profit organization that conducts volunteer bird research throughout New Mexico. RGBR has a Facebook page at this link: Rio Grande Bird Research Inc.

The project was started in 2003 by then teen birders Raymond VanBuskirk and Ryan Beaulieu. The two teens fell in love with these beautiful birds the first time they visited the feeders at the Sandia Crest outside of Albuquerque. They quickly discovered there was very little known about these birds and they decided to do their own research. The two teamed up with RGBR to begin what would turn into a full fledged ecology study of these amazing birds!

In 2005, Raymond and Ryan were in a car accident in Eastern New Mexico while out birding. Ryan tragically passed away on August 27th, 2005 and the entire community was shocked. Ryan’s enthusiasm and love for his friends and family, the environment and the Rosy-Finches was contagious and joyful beyond measure. His death was an unfathomable loss to the community and the world. After his death the Rosy-Finch project took a special place in the hearts of RGBR and CNMAS. Today the project is continued in Ryan’s name, there is a plaque in Ryan’s memory that hangs over the Rosy-Finch feeders at the Sandia Crest which is slapped every time a bird is caught and the birds themselves receive a little kiss before they are released, a tradition that Ryan started when the project first began. Click here to see a page dedicated to the memory of Ryan’s life.

Raymond brought Michael Hilchey (another young birder who “caught the birding bug” from Raymond and Ryan’s unhindered enthusiasm) onto the project in 2005 and today the two continue the research in memory of Ryan. The project is now over 10 years old and, with the help of dozens of volunteers, has grown into the largest Rosy-Finch ecology study of it’s kind and the Sandia Crest has become the premier site to see Rosy-Finches in the world! Raymond and Michael plan to continue to grow the project for years to come. 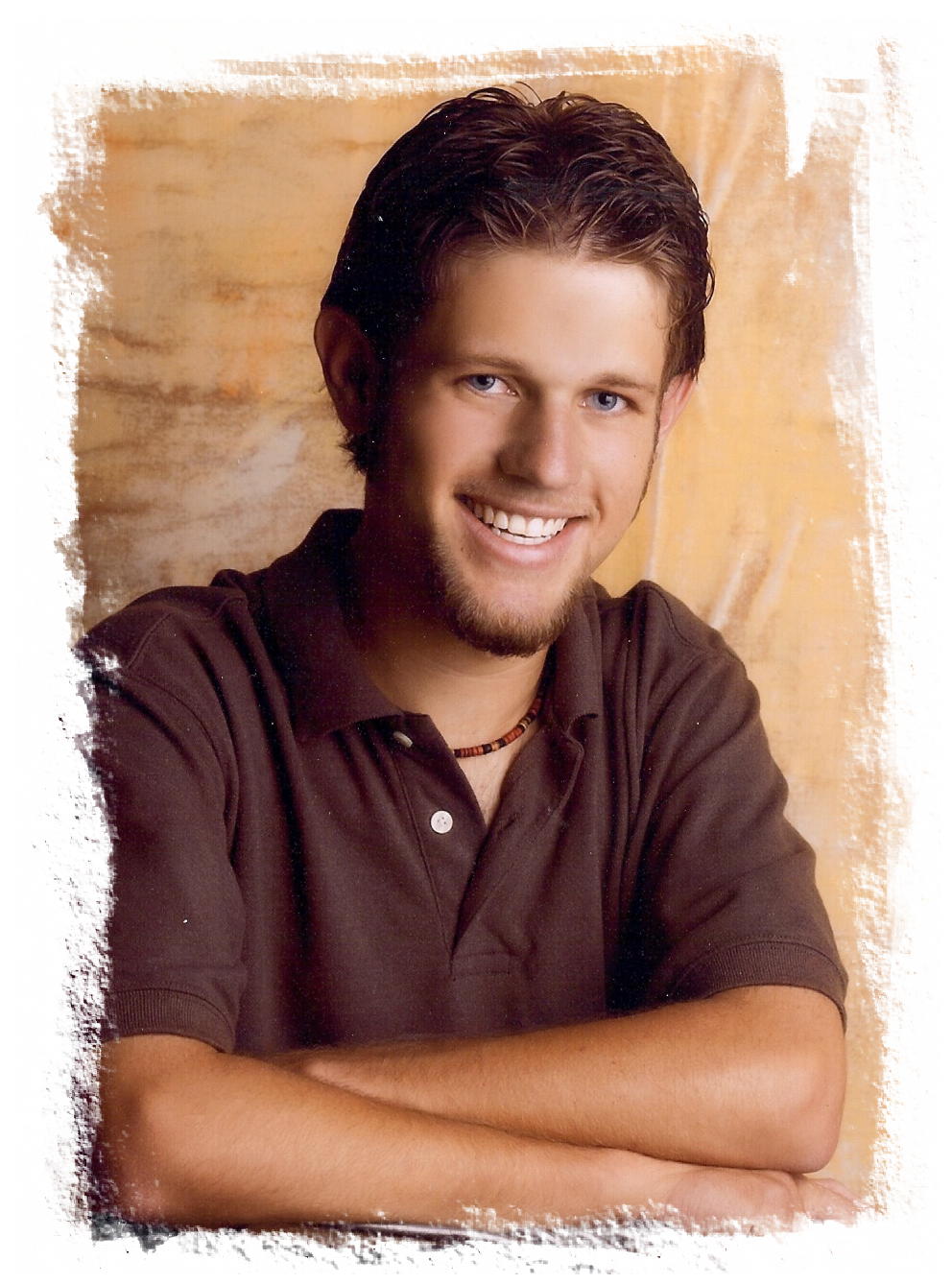 In Memory of Ryan Beaulieu

There are three species of Rosy-Finch in North America and at the Sandia Crest, the Black, Gray-crowned, and Brown-capped Rosy-Finch. These birds absolutely gorgeous and highly sought after in the birding world. They breed in tundra habitats from Northern New Mexico north through the Rocky Mountains into Canada and all the up to Alaska and the Bering Sea. In the winter the birds disperse great distances in search of food and they often congregate in large mixed species flocks. Click the links below to see species accounts for each of the three species.

So little is know about Rosy-Finches that their conservation status is largely unclear. However, there is evidence that these birds might be at risk from a few different factors:

These threats to Rosy-Finches have very serious implications on the survival of the species and on the health of high elevation habitats all over the world. But we need to know more! That’s where the project comes in. Through the Rosy Finch Project, we are trying to learn as much as possible about these birds. That way, we can better understand how global warming and other environmental factors affect them and we can take steps to prevent losing these beautiful birds.

So what’s being done? Below is a summary of all the different research facets that the Rosy-Finch Project is working on: 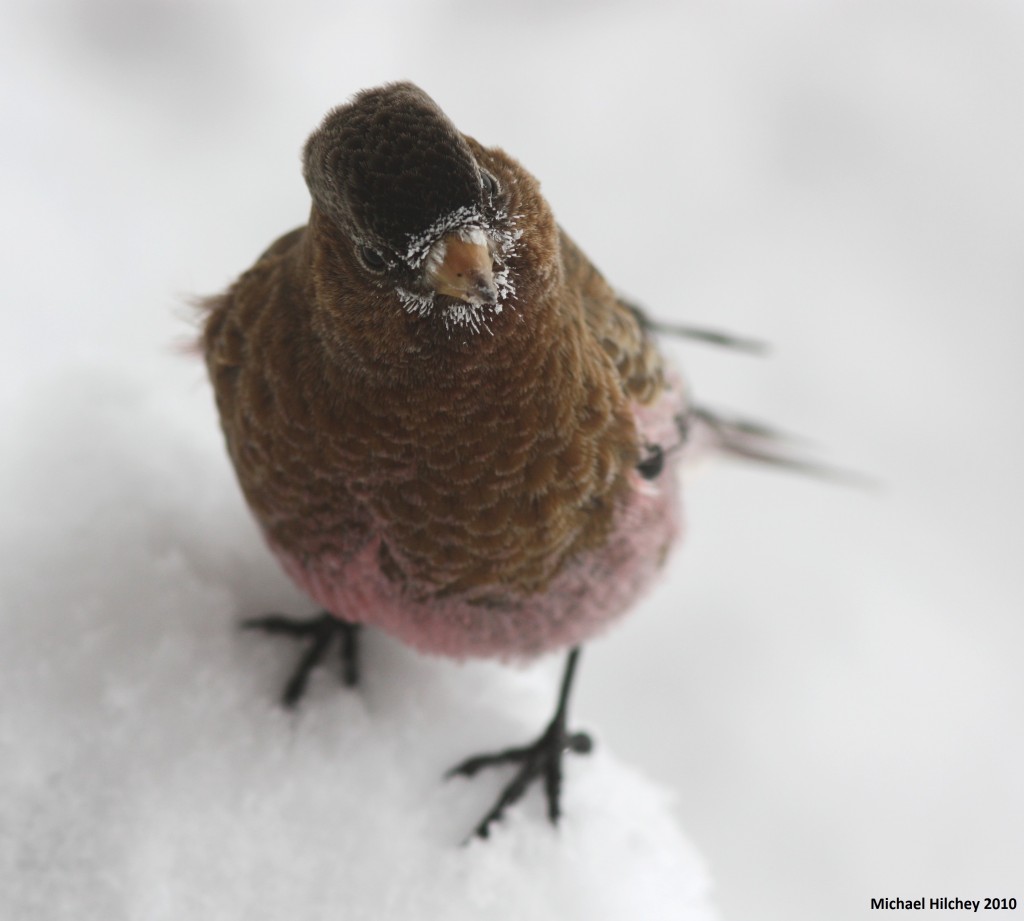 As stated above, the project runs entirely on volunteer support and is always looking for help. Specifically there is a need to folks interested in helping to do data entry and field work. Anyone interested in learning how to participate in banding, radio telemetry, summer surveys, data entry, etc. should contact the CNMAS President.

Rio Grande Bird Research and CNMAS want to invite you to come visit the Sandia Crest, the Rosy-Finches and the the project! The Rosy-Finches are present at the crest from November till March each year and the RGBR is banding birds every Sunday during that period. Come enjoy the beautiful birds and scenery and you may even get to participate in the banding process. Remember that it’s cold up there and the roads are not always safe.

Additionally the researchers give frequent presentations about the project all across New Mexico and sometimes further afield. Some of these presentations are paid events but many of them are free.